Situated in the State of Rajasthan in Western India it is home of the wild tigers, the majestic mammals, and birds. The destination was a hunting reserve of the erstwhile Maharajahs of Jaipur. Old monuments like a fort or a hunting lodge, temples and huge reservoirs built during the heydays of the Rajput kings can be seen on the game rides. Some of these are in a preserved state while many are in a state of absolute decline.

Tigers rule over the ramparts of the fort and other hunting pavilions some of them also breed in the vacated buildings and flourish. At Ranthambhore hunting is banned as also all over the country. Hence tigers a breeding well and their population is on the rise. 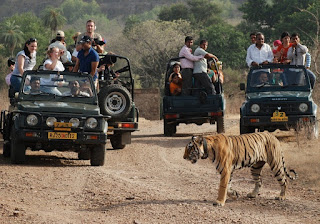 A small portion of the reserve is open for tourism which is divided into many zones. This is where the safari jeeps ply ferrying eager tourists keen on sighting the tiger and other animals. These safaris are organized and a permit is required for excursions. Mainly open jeeps and canters are allowed to enter the park for the game rides.

Being part of the Golden Triangle tour which comprises of a visit to Jaipur, Agra for Taj Mahal and New Delhi, the reserve receives a large number of visitors every year. Some tour operators offer packages that include destination close by such as Udaipur or Jodhpur. 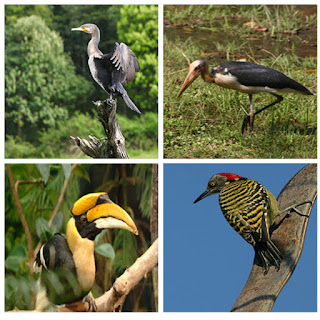 The place is home to the tiger, leopard, sloth bear and number of deer species. On a safari one can see the animals mentioned here and also the Nilgai antelope, wild boar, langur monkey and the peacocks. The sightings of these animals make your forest excursions extremely exciting. For tourists with more specialized interests birds abound throughout the park. A large variety of avian can be checklist during the tours.

Other creatures seen in the wild are the marsh crocodiles and monitor lizards. The crocodiles hang around the water bodies surrounded by tall grass. These are the venues of fights between the tiger and the crocodile over a prey killed by them. Incidentally, the thrilling actions here have been filmed by major companies especially that of the tigress killing a deer in the water. The tigress was called Machli and she discovered a way to hunt deer in the water which is a grand spectacle now.


In order to support tourism the infrastructure comprises of good roads to the preserve as well as a number of heritage and star wildlife resorts nearby. Wildlife resorts are the major attraction of high-end clients. Many holidaymakers on tiger safari at Ranthambhore stay in these luxurious palaces.

The destination is closest to Jaipur and is about a few rides. A six-hour drive is required to reach Jaipur from New Delhi the Capital of India.

August 20, 2019
Heartburn, or acid indigestion, is a burning sensation mid chest that worsens when you bend over or lay down. It usually occurs after eating and at night. It is caused by reflux. Reflux occurs when the acid in your stomach backs up into your food pipe (esophagus), resulting in inflammation. It is considered a disease when you have symptoms more than 2 times a week.
Gastroesophageal Reflux Disease (GERD) is a condition of digestion that allows stomach acid to go up the esophagus due to a weakening of the muscle at the point where the esophagus ends and your stomach begins. GERD often interferes with routine daily activities, and result in damage to your esophagus.
Symptoms include heartburn, vomiting or spitting up blood, bitter taste in your mouth, burning sensation in your chest pain, dry cough, painful throat, painful swallowing, and a hoarse voice.
Complications from GERD include scarring of the esophagus, bleeding in stomach or esophagus, and ulcer formation in the esophagus o…
Post a Comment
Read more

August 07, 2019
You shouldn't let fashion overwhelm you. Style is about you expressing your uniqueness through what you wear. Your style should reflect who you are on the inside, and that is a confident, bold, and fierce woman. And it is critical that how you feel on the inside and how you look on the outside are balanced. So that means you should look good and feel good.
The world of fashion is a fun and exciting place. And it has room for you to be able to fully express yourself. And there are some things you can do to incorporate being more stylish into your life, inexpensively. But before you read the tips, it is important that you don't compare yourself to other women and what they are wearing. That mindset is critical. Wear what works for you. Remember there are no perfect women so don't strive for perfection. Trying to achieve perfection will just make you feel inferior and frustrated. Nobody is the same and neither is their fashion sense.
1. Add a colorful scarf: Adding a colorf…
Post a Comment
Read more