Bhangarh - The Most Haunted Place in India 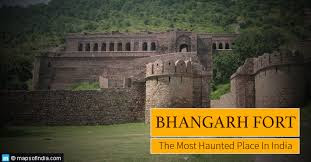 Bhangarh Fort (Fortress in Rundh Bhangarh, Rajasthan) is infamous for being "The Most Haunted Place" in India. It is a 17th-century fort, located at the border of Sariska Tiger Reserve in the Alwar district of Rajasthan. These fort ruins have an eerie and extremely negative aura to them. Numerous paranormal activities and sightings have been reported in the fort due to which no villages lie in its vicinity. ASI (Archaeological Survey of India) has placed a hoarding at its entrance, forbidding the tourists or locals to enter the fortress before sunrise and after sunset. 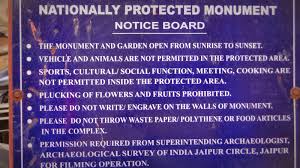 The Bhangarh town was established in 1573 by Bhagwant Das, the Kachwaha ruler of Jaipur for his  second son Madho Singh. There are two contrasting stories attached to the fort, providing a meaning   to its ghostly atmosphere.

1. The Prophecy of the Ascetic 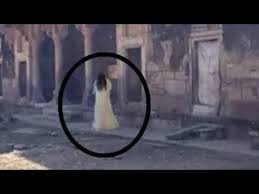 It is said that Madho Singh had taken permission from an ascetic Bala Nath who  lived in the near  vicinity of the fortress, to raise the fort. Ascetic granted him the permission on a condition that the shadow of the fort should never fall upon his home. As fate would have it, an ambitious successor of the king raised the structures vertically, thereby causing its shadow to engulf the ascetic's abode. The ominous prophecy was fulfilled and the fort was doomed in no time.

2. The Curse of the Magician 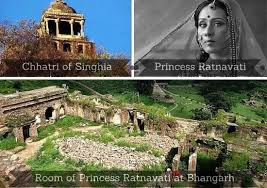 The second, more popular legend is of Princess Ratnavati of Bhangarh and the local black magician who fell in love with the bewitching beauty of the princess. So obsessed was he that he placed a powerful spell on a cosmetic that she used. The spell had the power to pull any mortal or object towards the magician through a spellbound magnetism. The princess, however, found out about the conspiracy in time and poured the cosmetic over a boulder, which in turn got pulled towards the magician and crushed him. Before dying, the magician placed a curse upon the entire town that no soul would ever live in peace there and no housing structure would ever stand erect. The entire landscape in and around Bhangarh has been haunted since. 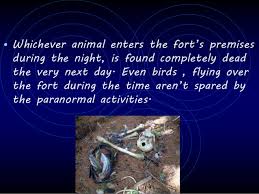 The fortress attracts hordes of tourists, however, for all the wrong reasons. Several stories have been circulated along with the claims of those who state that those who tried their luck by not paying attention to ASI warnings either went missing or experienced chilling ghostly phenomenon inside the fortress. The claims might be figments of a few imaginative minds, albeit being told and supported by various people having no connection with each other.

The nearest town from Bhangarh is Alwar, situated at about 90 km. Several taxis and buses are available from Alwar.
• Bhangarh is located around 269 km from Delhi via Neemrana route and 242 km via Alwar route by road.
• Bhangarh Fort is just 83 km by road from Jaipur 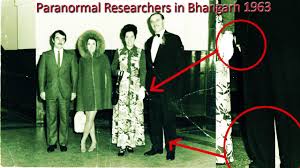 Whenever the word "Supernatural" is uttered, several heads are turned. Many make-believe ghost stories have been floating around for centuries because humans have always been attracted towards fear of the unknown. This article is an attempt to make the readers aware that there is, in fact, such a place in existence in Rajasthan which is considered the most haunted place in India, probably Asia. Bhangarh fort has ASI bearings on it, forbidding anyone to enter the fortress before sunrise and after sunset. Several unexplained disappearances of thrill seekers have been reported as well as otherworldly sightings which defy logic.

May 15, 2018
Finally, One more girl from B-town got married on May 10. Neha Dhupia's and Angad Bedi's marriage came as a big surprise for Bollywood as they secretly tied the knot first and announced it later. Neha got married to Angad Bedi in the capital and the duo had a traditional Sikh wedding.


While everyone was occupied with following what was occurring at the Kapoor Mansion (Sonam Kapoor wedding), no one knew that Neha and Angad Bedi's wedding was in progress at a Delhi gurudwara. Neha Dhupia broke the news of her wedding by means of Twitter and fans were in for an immense shock. Karan Johar was among the primary big names to salute the recently married couple.

On her big day, Neha Dhupia wore a pale pink lehenga and wore kundan jewelry. Angad wore a white sherwani and pink safa; both appeared to keep the wedding look straightforward yet jazzy. "Best decision of my life... today, I married my best friend. Hello there, husband," Neha wrote on Instagram while Angad added: &…
Post a comment
Read more